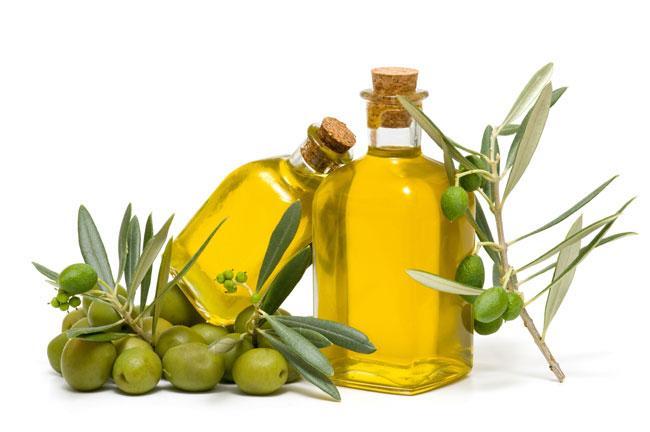 Olive oil composition
L ‘olive oil consists of two fractions:
Saponifiable: approximately 98-99% and consists of triglycerides.
UNSAPONIFIABLE: about 1-2%, and consists of minor components such as antioxidants and vitamins.
The fatty acids present in the saponifiable fraction are found in ‘oil as constituents of triglycerides and glycerides, esters of glycerol, (very few are free fatty acids: when large quantities are increasing the value of the acidity, so the chance of oils oxidize, starting from free radicals, making an unpleasant oil), esters with other fats, or mixed esters. The fatty acids are formed from molecules containing carbon atoms linked together by single bonds (saturated, cis form in the natural ones: 7/15% palmitic, stearic 1.5 / 3.5%) or one or more double bonds (monounsaturated , oleic 70/80%, and polyunsaturated, 10% linoleic, and others).
FRACTION UNSAPONIFIABLE: 1-2% of the total of ‘oil
These substances are responsible for important properties of oils: the organoleptic properties such as perfumes (fruity), smells (like apple, artichoke, almonds, pine nuts), the typical tastes (bitter sweet spicy …), the biological properties such as antioxidant preservatives and healthy; are also markers (substances guide) to highlight the presence of possible fraud. The unsaponifiable part:
1. alcohols that characterize the ‘smell of oil;
2. polyphenols, are 18-35% and are antioxidants. These substances are responsible for the ability of an oil to resist oxidation (rancidity), that their effect is to oxidize in place of the fat consumed in time. They then protective action (both on the oil as biological activity on the cells of the human body); their quantity is indicative of the degree of aging of an oil and its shelf life. Polyphenols are a large family of compounds or natural pigments with important biological properties. They are found in fruits and vegetables and in some fermented beverages such as wine, beer, tea. Among the most representative classes are flavonoids, phenolic acids (or phenols) and tannins that give to foods where there are the organoleptic characteristics. Polyphenols have been recognized numerous features, including: antioxidant, anti-inflammatory, anti-allergic, antibacterial and antiviral. Polyphenols seems that they can be useful, along with other natural pigments and vitamin compounds, in the prevention of chronic diseases such as cardiovascular disease and cancer. In particular, it has been suggested that the polyphenolic substances may perform protective action in respect of low-density lipoproteins, by oxidative processes, the mechanism involved in the formation of atherosclerotic plaques. It seems that they can also act through an action antiplatelet and fibrinolytic;
3. tocopherols are 2-3%, and among these antioxidants are compounds with a biological activity that is greater alpha-Tocopherol constituent of vitamin E, (about 150-300 mg / kg of oil), lipophilic, with a strong power antioxidant especially to polyunsaturated fatty acids that are the most likely to oxidize.
They are then present in olive oil other substances among which are:
fat-soluble vitamins A, D (derived steroids) and E (antioxidant); the vitamin A, directly is not present, but is formed by cleavage of b-carotene by the enzyme carotenasi present in the liver; for this reason, the b-carotene is defined provitaminaA.
The carotenoid pigments (including b-carotene), chlorophylls (with az. Also antioxidant, even if only in the dark, together with vitamin E): give the oil the yellow coloration of the first, the second green (slightly higher for olives mature). Carotenes acting on the molecules of oxygen, in the presence of light, the action of turning off the production chain radicals (antioxidant action).
Chlorophylls degrade in the presence of light, changing the color to yellow oil, and have detrimental effect on ac.grassi allowing oxidation; in the absence of light instead behave as antioxidants together with polyphenols
To the members of the so-called “minor”, recent studies attribute protective and antioxidant capacity of the organs and tissues of the body, able to fight some pathological phenomena such as atherosclerosis, aging and cancer. The antioxidants, and also between these polyphenols, seem to play a direct role as carcinogenic agents.
Although it is not yet certain the percentage of aid that extra virgin olive oil is able to offer to the fight against certain types of cancers, are however certain statistical processing of cancerous diseases related to eating habits.
The reduction of some types of cancer is, in fact, directly proportional to ‘use of olive oil and olive oil.
In Italy, for example, the death rate due to this terrible disease is very low in the south, where it produces and makes extensive use of olive oil. And ‘more marked in central Italy, but increases significantly in the north, where there are eating habits linked to a diet more rich in animal fats.